I recently had a conversation about genetics with my dad. He is in his seventies and we laughed over the fact that when he was in elementary school, it was not known which molecule in our bodies was the hereditary material. It wasn’t until 1952 that scientists figured out that DNA was the means by which genetic information is passed down from one generation to the next. In 1953, Watson and Crick first coined the phrase “double helix” referring to the twisted ladder structure of DNA. Since then, it has taken decades to unravel the function and meaning of our DNA, and that investigation is far from over.

As all of this pivotal research was just beginning to eke out during my father’s formative years, he learned virtually none of it in school. So when he asked me a question about genetics, I grabbed a pencil and paper and started from the beginning.

Surely, I thought, he’s not the only one who did not receive a proper education about genetics. Even those of us who had a more comprehensive study of biology have been given misinformation (junk DNA, anyone?). This can be problematic for many, as genetics is becoming an increasingly vital part of healthcare. So, for all those who need to brush up on the basics of genetics, let’s have a chat about Genetics 101.

Our bodies are made of trillions of cells. Most of these cells contain instructions to help our bodies grow and function the right way. These instructions are housed in the form of deoxyribonucleic acid (DNA). DNA, in turn, is wrapped really tightly into structures called chromosomes, which hang out in the very center (nucleus) of our cells. DNA is made up of strings of the nucleotide bases adenine (A), cytosine (C), guanine (G), and thymine (T). So while the English language has 26 letters to spell things out, our DNA only has four. Certain stretches of DNA are sectioned into genes, which provide the necessary instructions for a cell to make proteins. These proteins play many roles in our bodies, such as making LeBron James 6’8”, giving Einstein an IQ of 160, and making Julianne Moore a redhead.

Humans inherit one set of chromosomes, and thus one set of genes, from the mother, and the other set is inherited from the father. Biological sex is determined by which sex chromosome the father passes down, as mothers can only pass along an X chromosome. (In other words, King Henry VIII of England beheaded all those wives for nothing.)

What we’ve just talked about are the bare bones of genetics. Think of this as a kid’s drawing of a person. Right now, we’ve covered enough for you to draw a stick body, stick limbs, and a head. But there is a seemingly infinite amount of information out there, and even more that has yet to be discovered.

If you have a question regarding general genetics information, you can submit it to our Ask A GC form. A genetic counselor from CooperGenomics, who has spent years learning this information, will be able to sketch in the fingernails, eyelashes, and freckles of the stick figure you’ve just learned about. 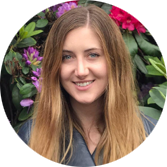 Jenna Miller is a board-certified and licensed genetic counselor. She holds a Bachelor of Science degree in Genetics and Biotechnology from Brigham Young University and a Master of Science degree in Human Genetics from Sarah Lawrence College. Jenna began her career at the biotech startup Recombine by providing genetic counseling services to patients and physicians. She then moved into clinical diagnostics for expanded carrier screening, and eventually lead CooperGenomics’ clinical diagnostics team. Jenna has been CooperSurgical’s clinical science liaison since 2017. In this role, she travels North America educating healthcare providers about genomics within the ART field. Jenna is passionate about genomics education, informed consent, and ethical approaches to genomic testing. She hopes to share her enthusiasm for clinical genomics with everyone she encounters.